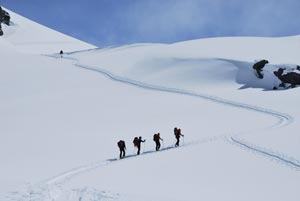 Ski-touring, skialp, Ski-Touren..  many words which all point to the same discipline. What do people mean with this? Is it skiing or is it mountaineering? Or both? And then.. skinning your way up a hill? That sounds odd indeed.

Ski touring is becoming more and more popular and it consists of going uphill with skis which have (artificial!) skins underneath. Once on top, you take the skins off and then go down. It is the perfect way to find respite from the madding crowds and enjoy some unspoilt, quiet place. The perfect way to be in unison with nature. No more queues, no more tickets, but only the mountains and us.

It should be pointed out, however, that this sport cannot be improvised. You may well have the correct stamina and be fit, but there is a specific competence which requires adequate training. In particular as far as snow and its formation is concerned. You must be aware of its components, how it transforms according to certain weather conditions and, most of all, you should be able to read an avalanche forecast report. You also must be able to use a transceiver (which is vital in case of avalanches) and be ready to change your plans if the conditions oblige you to do so.

If in doubt, do not merely follow the advice of some friends, but hire a professional mountain guide, who will make your experience an enjoyable one.

Let’s look at the gear. At first sight, it may seem complicated, but here are a few tips.

Your vital kit. Without this, you should simply not venture out in the outdoors. A transceiver will help you find one or more person who have been hit by an avalanche. A probe and shovel complement this set, as they will further help rescue operations.

Ski touring boots have two modes: ski and walk. This way, your progression upwards and your descent will be smoother. Choose your boots carefully, even if that means spending hours in a shop, trying various models. It will be time well spent. If you are hasty, you may regret it when you suffer during your excursions!

Ski. At the beginning, a width of 80 to 90 mm under your foot is more than enough. It is advisable to buy skis which are 5 to 10 cm less than your height. Don’t buy skis which are too heavy, as that will tire your legs and will not make you enjoy the descent as much.

Bindings. These differ from those of piste skis in that they give you the chance to unlock the heel. During the ascent, the heel will be free to move and it will then be blocked for the descent. The most common bindings are from these brands: Dynafit, Marker, Silvretta and Fritschi (Diamir).

Skins  These are adhesive and cut to measure. You apply them to the base of the skis on your way up. A strange feeling at first, but they will allow you not to slide backwards when going up. Maximum attention and care is required after each use. This will grant your skins a longer life.

Rampant crampons. These are crampons for the skis and are applied between the skis and the binding on icy terrain. If the slopes become too steep, however, it is advisable to attach your skis to your rucksack and proceed on foot (with crampons under your boots.)

Ski poles.  Ski touring poles have a bigger plastic washer, a no-slide grip and a strap which will aid your movements during the ascent.

Rucksack with ski holders   A good ski touring rucksack should have ski holders and also a specific compartment for probe and shovel. If you mainly do day outings, then a 30/35 l pack will be more than enough.

Enjoy yourselves and delve into the magical world of ski-touring.