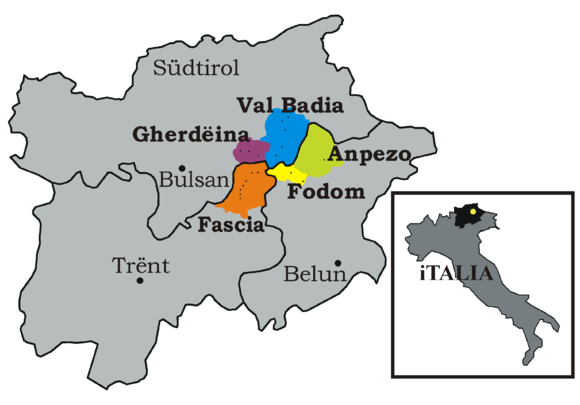 There are many ways of keeping this language alive, and the pop music group Ganes makes a good case in point. They made the unconventional choice of singing in Ladin, thus being understood only by people from their valley. A faux pas in the marketing world? Quite the opposite: they hold over 80 concerts a year and have released four studio albums so far. What’s their secret? They express their emotions with their music, and claim only Ladin will do the job. They sometimes translate their songs in English, but that’s a different kettle of fish altogether...

Another example of how this language is still alive and kicking is offered by the writer Rut Bernardi. She composes her poems in Ladin and is happy and proud of this. She can find the perfect way of expressing her emotions and finding her own identity. Though part of a ski club as a young teenager, she decided to forego this in favour of books and language studies. She started writing in German, like all her other peers, but one day she held a conference in Ladin and a lightning had struck. There was no going back from there. She started writing poems and tales and is the author of the first Dada poems (the avant-Garde art movement in the early 20th century). She dreams of writing a novel, but time is precious and, in the meantime, also works as a translator and journalist.

Watch some footage on her here.

This is indeed food for thought. We are not talking about elderly people here, desperately trying to fight for the survival of a language they hold dear. Quite the opposite. These are young people who have understood the power and relevance of their own traditions and want to show that this language is part and parcel of their lives. No impositions whatsoever, but a lot of work and research to make their dream happen. They deserve our respect and full admiration, don’t they?

Go and discover Ladin cues and hints during your next holiday… you will deeply enjoy this language and discover a new dimension to South Tyrol!